When we first released the Reader’s Edition in 2018, we launched an errata page where readers could make suggestions about things to fix. With 3,300 pages and ~125,000 footnotes, we knew there were errors along the way. (At some point you simply have to press “print”).

Anyone who submitted a correction would be entered into a drawing for a corrected edition once it hit shelves. Shortly after launch, we quickly had to do a 2nd printing (which is good news) and were essentially limited to changes that the Hendrickson team, Will, and I caught. But now we’re are about to send the book off for a third printing, and we were able to work through the list of errata this time.

The good news, we think, is that in the intervening years only ~170 suggestions were submitted, and about 50 of those were redundant (i.e. submitted by someone else). The proportional breakdown of the categories of revisions is as follows:

Over thirty people submitted revisions. Thanks to everyone who took time to do it!

We’ve been given approval by Hendrickson to give away not 1 but 2 free copies of the third printing. The winners are…

Congratulations to Mark and Brent!

And many thanks to Hendrickson for donating these two copies!

We are excited to announce that our new guide to the Septuagint will be released in a few weeks from Crossway. It is titled The Septuagint: What It Is and Why It Matters, and it aims to introduce the complexities of the Greek Old Testament to a broad audience (educated laypersons, Bible students, ministry staff/pastors, etc.).

This is our third major project together in the vein of Septuagint studies. Stay tuned for more in a few years!

We are pleased to announce that our new book, A Book-by-Book Guide to Septuagint Vocabulary (Hendrickson), is releasing in the coming weeks. It is currently on pre-order sale for 50% off as well! 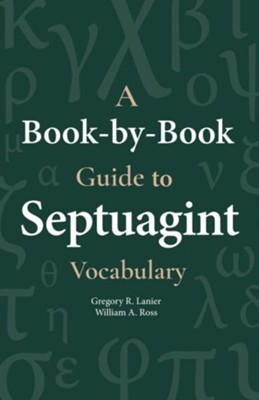 This book fills an important gap in the market by providing a tool to help those reading the Septuagint “get up the learning curve” with Septuagint vocabulary. Surprisingly, there’s no comparable resource out there in an accessible form.

The book consists of 28 chapters that present vocabulary lists for specific sections of the Septuagint corpus. Within each chapter, vocabulary is arranged according to frequency for that section of the Septuagint, which allows users to focus on the most important words (by frequency) within sections of most importance to them. Each list consists of twenty words, which we deemed to be an ideal size for memorization. And each chapter includes enough lists (typically over a dozen) that enable the user to attain roughly 85-90% proficiency for that section.

END_OF_DOCUMENT_TOKEN_TO_BE_REPLACED

We announced in November that we would be giving away two free copies of Septuaginta: A Reader’s Edition. After a bit of a delay due to the end-of-year holiday season combined with J-term classes for us both, we are finally able to announce the winners.

END_OF_DOCUMENT_TOKEN_TO_BE_REPLACED

We have been really pleased over the past several weeks to see the enthusiastic reception of the Reader‘s Edition. It’s garnered a lot of positive attention in various outlets in terms of both production and content. Here are some examples from around the blogosphere:

Zwinglius Redivivus
Abram K-J
Exegetical Tools
Evangelical Textual Criticism
theLAB
Books At a Glance
There is even a pretty lengthy unboxing video and a shorter one.

Amidst all this discussion, one question has been raised fairly often: Where should I start?